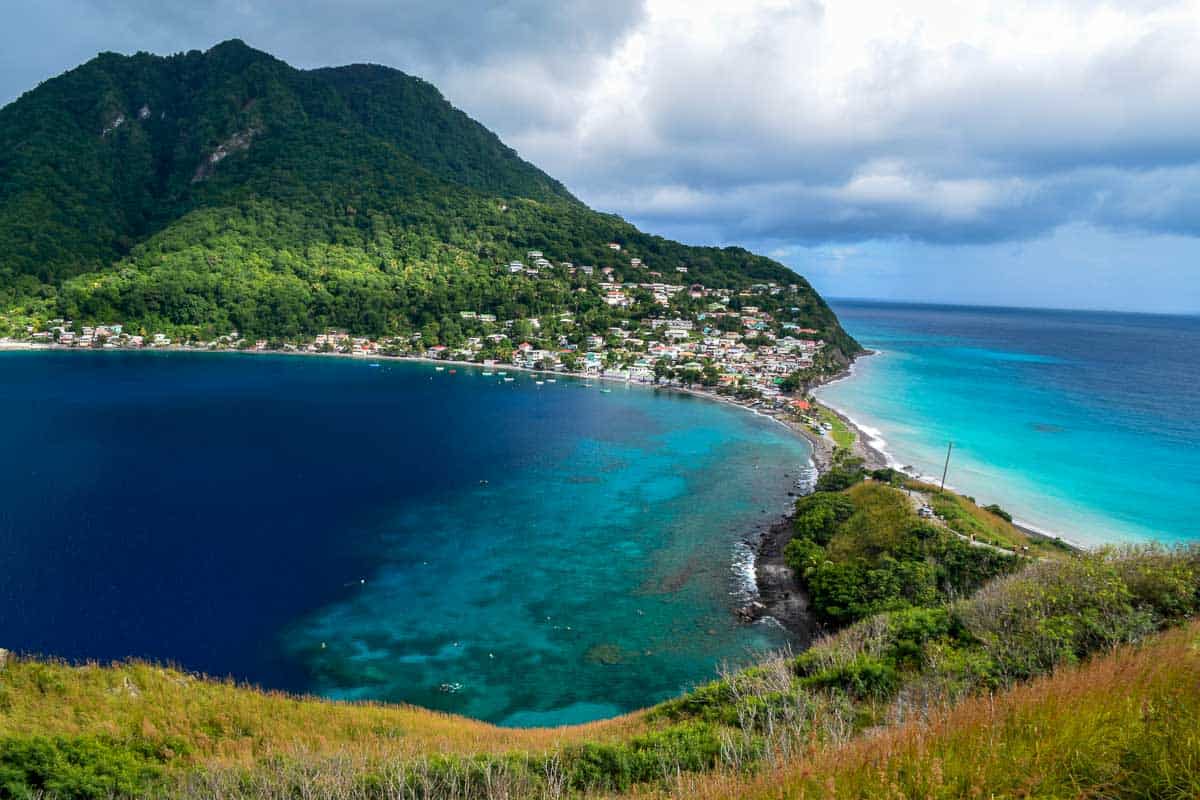 LOCAL GUIDE TO THE BEST BEACHES IN THE COMMONWEALTH OF DOMINICA

Dominica also called the Commonwealth of Dominica is a small Caribbean island located in the West Indies. Dominica is called the Nature Island and is full of opportunities for adventure by both land and sea. One of the best-kept secrets in the Caribbean, the Dominican landscape is a natural wonder with rainforests, rushing rivers, volcanic hot springs, and some of the best diving in the world.

Roseau, the capital of Dominica, is considered to be one of the smallest in the Caribbean, but it is full of energy, history, and delicious dishes to feed a foodies palette. On top of the action in the local fishing villages and cities, are miles of shoreline and stunning beaches to explore.

With the warm-turquoise Caribbean Sea on the west and the wilder Atlantic Ocean to the east, the beaches of Dominica are very diverse. They offer a healthy mix of calm sandy beaches, to rocky volcanic shores, so be sure to bring your camera to take pictures of Dominican beaches. If you are looking for romance, sunsets on the west coast of Dominica are stunning. There are over 60 beaches in Dominica, so be sure to pick up a Dominica beaches map, but here we have highlighted a few favorites to visit while on the island.

This beach has warm, calm, and shallow waters suitable for mooring and swimming 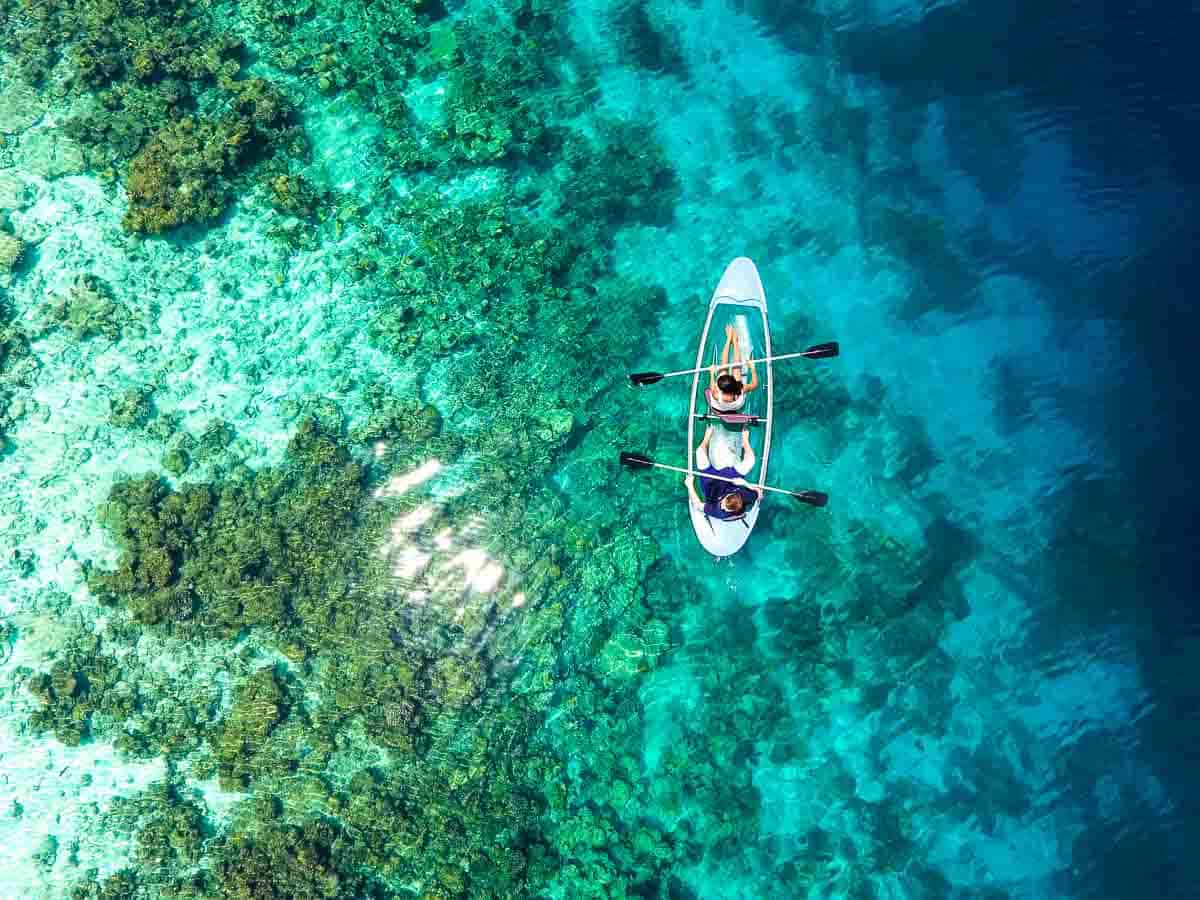 Located in Portsmouth on the northern part of the island, this 2 mile stretch of light brown sandy beach is one of Dominica’s most visited beaches. Purple Turtle is a hot spot for locals and tourists alike and is located just a short drive from many famous historical sites like Fort Shirley, the Indian River, and Prince Rupert Bay. This beach is frequented by visitors from both the land and the sea.

This beach has warm, calm, and shallow waters suitable for swimming

Named after a small town on the west coast of Dominica is Mero Beach. Mero Beach is crisp and clean, comprised of black volcanic sand with silvery grains that shine bright in the sun or moonlight, making Mero Beach a top choice for romance. This beach is also nearby another popular piece of shoreline called Salisbury Beach.

Rocky shoreline. This beach has warm and shallow waters suitable for swimming

A large stony beach located a short drive south from Roseau, Champagne Beach is one of the islands most talked about beaches. Champagne Beach is part of the Soufriere-Scott’s Head Marine Reserve so it is protected and visitors can swim in the warm bubbly, champagne-like waters and sulfur springs caused by volcanic activity.

Rocky shoreline. On the Caribbean side, this beach has calm and shallow waters. On the southside, is the Atlantic Ocean, and the currents and waves can be stronger

Located at the southern tip of Dominica is this tiny strip of beach called Scott’s Head Beach, near to a small fishing village. On the south side of the beach is the turbulent Atlantic Ocean and a view of Martinique, on the north side is the calm waters of the Caribbean Sea. At the point, you can find the remains of the first British Fort in Dominica. 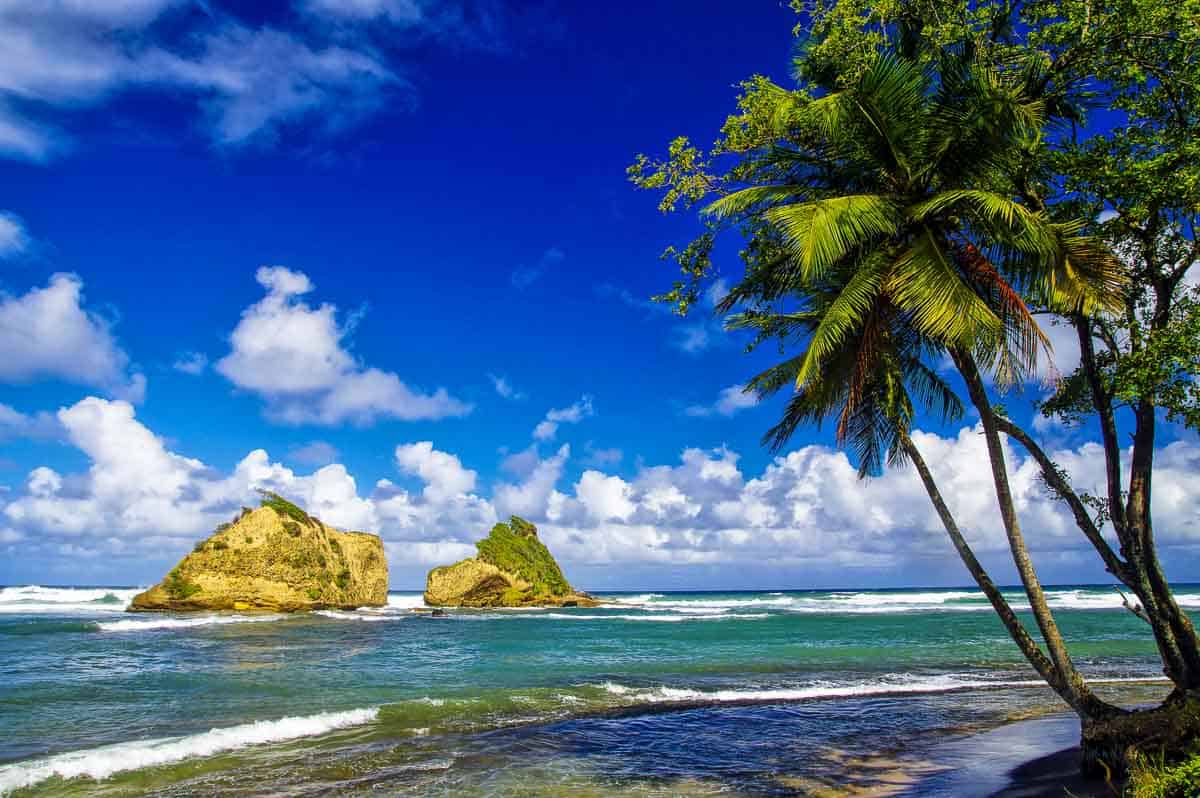 This sandy beach is generally warm with shallow waters, but could have undertows or strong currents so exercise caution when swimming 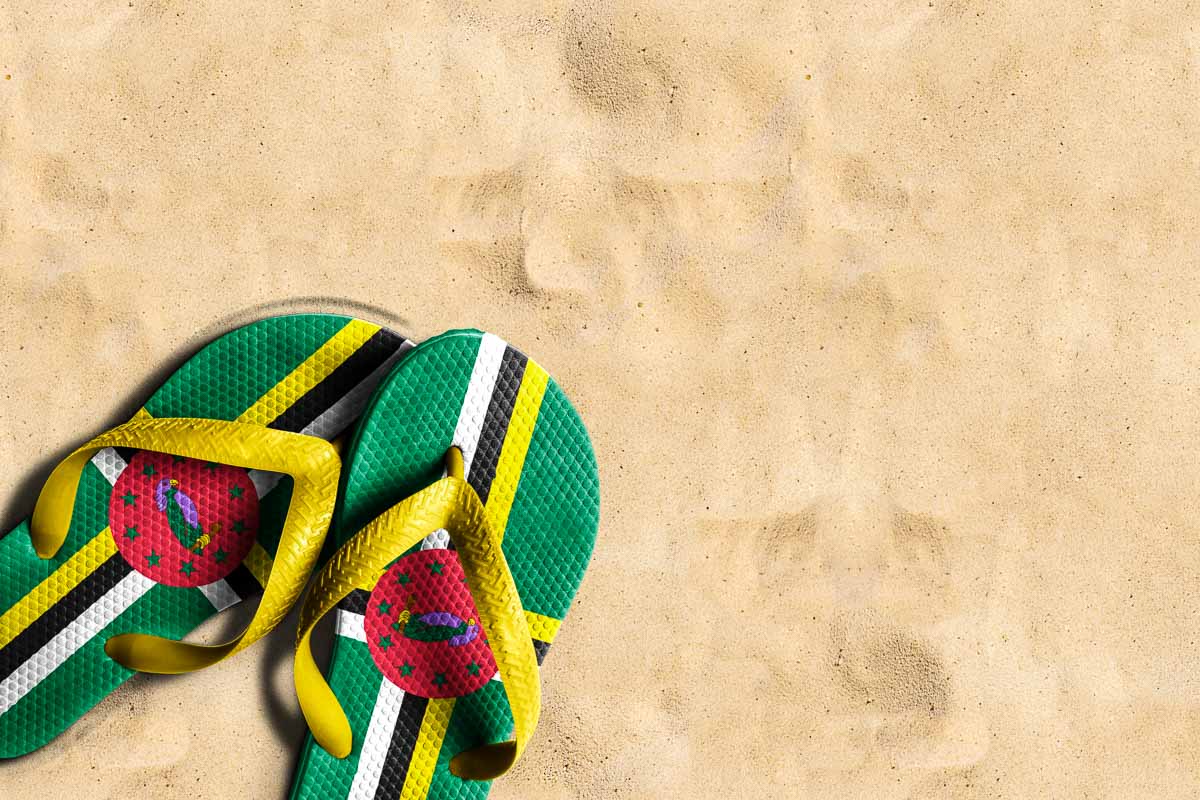 Woodford Hill Beach is located on the northwestern coast of Dominica. Unlike many black volcanic sand beaches, this beach is known for its golden sand and beautiful scenery due to coral reef formation in the area. Because of its location further away from the city, this beach is more isolated and untouched, giving visitors the feeling of being on an abandoned beach in paradise.

Nearby town Calibishie has facilities and restaurants

Black Sands Beach got its name because of its soft shimmery black volcanic sand. The color and texture of this sand is unlike most beaches and is like silk to the touch. Black Sands Beach is located near the northern point of Dominica and is located in a busy area of the island. There is no public restroom at this beach, so keep that in mind when planning your trip.

Nearby town Calibishie has facilities and restaurants

Calibishie Beach is the main beach in the Calibishie area in the northern part of Dominica. There are no public restrooms on the beach, but it is in an area with loads of shops, restaurants, and villas. This beach gets busy quickly, so get there early to find your spot on the sand. It is also nearby to other famous beaches like Hampstead Beach and Batibou Beach in Dominica.

This beach has warm and shallow waters suitable for swimming

Nearby town Portsmouth has facilities

A beach best reached by boat or kayak, Secret Beach in Dominica is famous for being filmed in the movie Pirates of the Caribbean. Secret Beach is located on the northwestern edge of Dominica and is considered to be one of the quietest beaches on the island. This beach is also a hot spot for scuba diving and the best snorkeling in Dominica.

Dominica has a tropical rainforest climate with heavy rainfall and moderate tradewinds coming from the northeast. Rain is possible throughout the year, varying by location on the island. The most rainfall is usually recorded between June through October. But the highest average rainfall comes between September through November during the Atlantic hurricane season.

If you plan to visit Dominica when the weather is best, you will want to travel there between February to April. This time of year has the least rainfall accumulations and also the warmest air temperatures. If you are used to cooler water temperatures, Dominica’s sea temperatures will be pleasant during this time, perfect for taking a swim to cool off. The average sea temperature in Dominica is 81°F (27 °C).

If you love visiting lively beaches, you are in luck. February to April is a popular time for cruise ships to visit the island so the beaches will be lively with a party-like atmosphere. Also, some tour and watersports operators close down during the rainy season, also called the low season, to do maintenance on their boats and equipment, so there may be fewer options to choose from unless you visit during the busy season.

Dominica is known for fantastic scuba diving any time during the year, but the best time to visit the island to go for a dive is from December through May if you want to avoid hurricane season. June to October is considered the rainy season in Dominica. You can still go diving during this time of year, but you may encounter wetter days and the potential for tropical storms or hurricanes.

Dominica has superb visibility due to the lack of pollution and industrial development on the island. This island is called the Nature Isle of the Carribean for a reason and is home to hundreds of marine life species. The reefs are teeming with life including rare species of frogfish, seahorses, and flying gurnards not seen on its neighboring islands.

Dominica is also known as the whale watching capital of the Caribbean. Up to 22 different species of whales can be seen around the island, and the sperm whale can be spotted year-round. Spotted dolphin and spinner dolphin often put on a show for divers and beachgoers.

Champagne Reef, which is easily accessible by the shore from Champagne Beach, is one of the most visited dive sites on the island. The bubbly hot springs caused by volcanic activity leave divers in awe, especially on a night dive. Dominica has dive sites for beginners, intermediate, and advanced divers.

1. How many beaches does Dominica have?

Although Dominica may not be well-known for its beaches, the island’s shoreline is made up of almost 60 beaches. These beaches are a mix between black or yellow sand beaches, not the white sand beach most people think of when traveling to the tropics. Dominica is a volcanic island, so the shorelines are usually rocky and made up of volcanic sands. However, some beaches have golden sands due to the coral formations close to shore. Visitors to the island can find highly populated beaches or miles of uninhabited shoreline to explore.

2. Where are the best beaches in Dominica?

If you like the calm waters of the Caribbean Sea, the beaches on the west coast are an excellent place to find the best beaches in Dominica. These beaches are popular for locals and tourist and offer various watersports like kayaking, snorkeling, and surfing. The west coast beaches have restaurants, bars, and beach parties with Caribbean music playing to set a relaxed but party-like atmosphere.

The east coast of Dominica also has some of the most unique and beautiful beaches in the Caribbean. These beaches are on the Atlantic side of the island and are usually more remote, giving you the feeling of being on a deserted island.

3. What is there to do in Dominica on a cruise?

If you are going on a cruise to Dominica, you will be met with loads of things to explore once you step off the ship. You can book a trip to take a dip in the bubbly waters of Champagne Beach or wade through the waterfalls at Trafalgar Falls. You can also take a tour to the Morne Trois Pitons National Park and see the Boiling Lake, a world heritage site or visit the chocolate factory at Pointe Baptiste beach.

If you like speed, rent a 4×4 to explore the rainforest, then spend the afternoon enjoying the Creole-Caribbean inspired cuisine, followed by some shopping in the bustling capital, Roseau before heading back to the ship.

4. Are Dominica and the Dominican Republic the same country?

5. Are there sharks at Champagne beach Dominica?

Dominica is located in the Caribbean, so there are undoubtedly various species of sharks living in the waters off the coast of Dominica. The most common are whale sharks, reef sharks, hammerheads, and silky sharks. Sharks are mostly seen in deeper waters while diving on the reefs offshore and are not aggressive towards beachgoers and swimmers at Champagne Beach. Sharks can be curious, but if you ignore them, they will ignore you. It is best practice to be aware of the corals and other sea life when swimming and avoid disturbing or touching marine life. 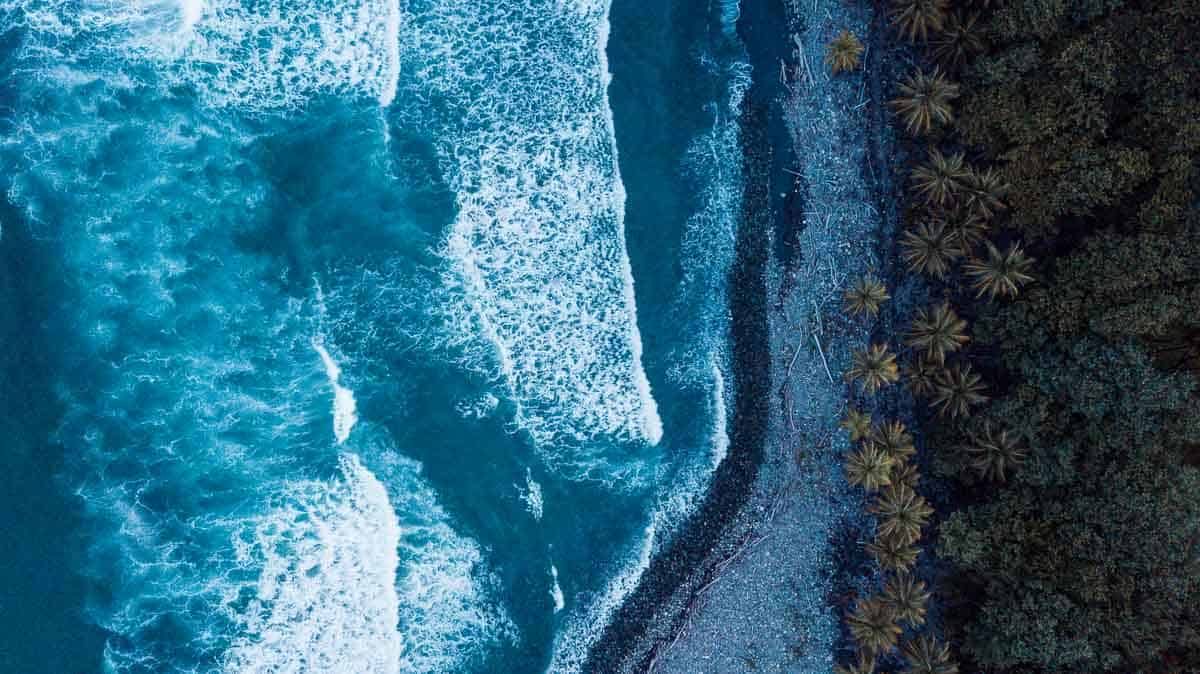 If you are an adrenaline junkie like Bill and myself, and you need to properly get involved in the Caribbean waters, then check through this guide our experts put together on snorkeling in the Caribbean. However, if you just enjoy visualizing yourself in an exotic paradise, then take a look at some of these jaw-dropping beaches in Guatemala, Trinidad and Tobago, and Fiji.

As always, we create our content with you – our fellow adventurers – in mind. So, how’d we do? Was this informative? Which beaches did we leave out? Got any golden nugget tips: share them with our happy, ocean-loving community?

We’d love to hear from you below. Thanks for reading and we hope your next adventure is a great one. Keep living Blue – Shaka & Cheers!