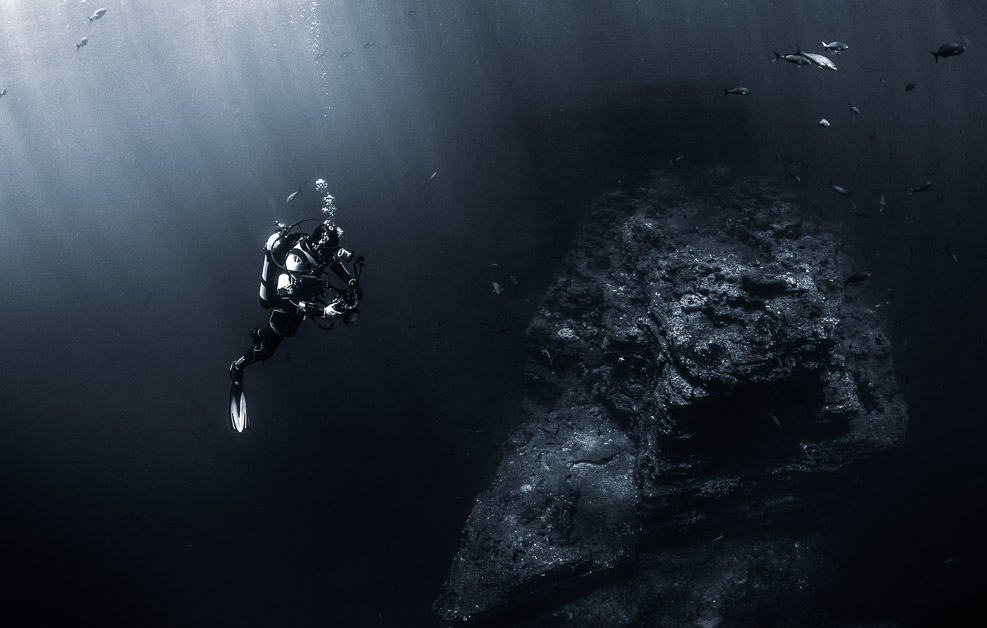 Suunto is a well-known, trusted brand with a great variety of dive computers on the market. So, which one is right for you? We’ve reviewed all the Suunto dive computers to help you decide. Wrist-mounted or console? Budget or top of the range? Suunto has something to suit everyone no matter if you are a new recreational diver or an experienced technical diver using multiple gases. Our round-up details features such as wireless air integration, dive modes, features. You’ll also find the pros and cons of each model to help you decide which one is best for your diving needs and budget. 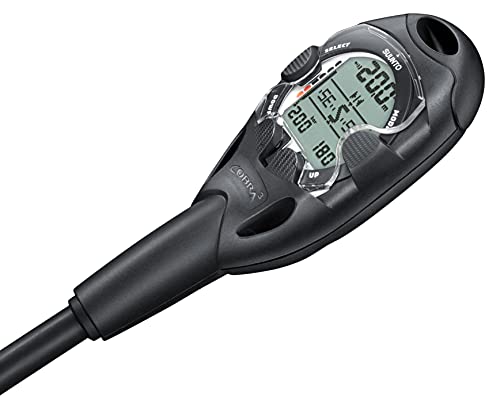 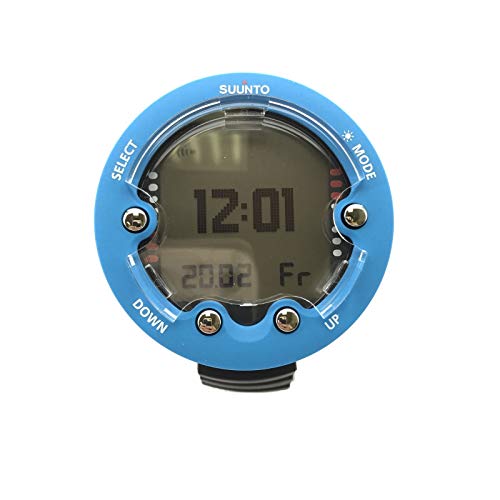 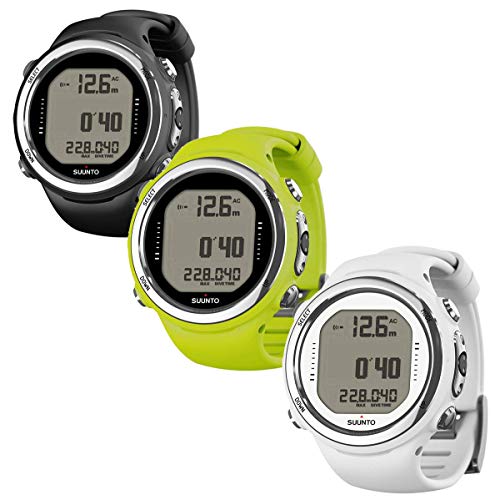 ALL THE SUUNTO DIVE COMPUTERS THAT WE TESTED

The Novo Suunto dive computer is a highly-rated and affordable dive computer and is our pick for best value among the Suunto product line. This Suunto dive computer features a four-button easy to navigate user interface, making it perfect for recreational scuba divers. The backlight is bright, and the matrix display makes it easy to read underwater in any condition. The dive log stores up to 140 hours, which can be transferred to a PC. The Suunto Zoop Novo can be used in freediving, Air, or Nitrox mode and comes in a variety of color options that can easily match a full set of color-coordinated dive gear.

The D4i Suunto dive computer is one of the most reviewed recreational scuba diving and freediving computers on the market. With a wide range of color choices and a flexible silicone strap, this wrist Suunto dive computer makes a perfect fit for all types of divers. The Suunto D4i is lightweight and made of durable materials built to last. This Suunto dive computer can be used in Air, Nitrox, freediving, and watch modes, and divers also have the option to purchase a wireless air transmitter to keep track of cylinder pressure during dives. The menu is user-friendly, and divers can transfer their dive log details to a computer using the USB cable. 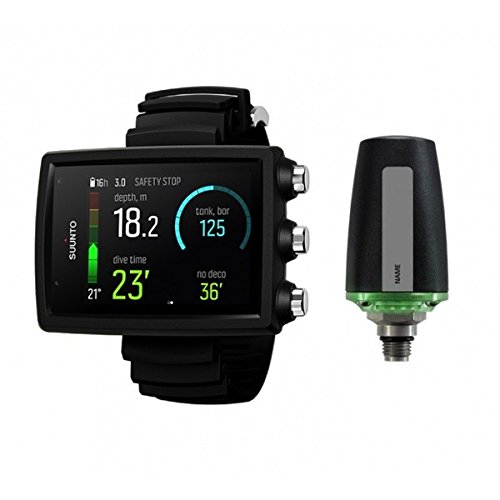 The Eon Core Suunto dive computer is a wristwatch style hoseless air integrated dive computer used by many advanced recreational and technical scuba divers. The display screen is customizable and full-color, making it easy to read during dives. The wrist strap is constructed with a stretchy elastomer material that can be comfortably worn over a wetsuit or a drysuit. The Eon Core Suunto dive computer supports Air, Nitrox, Trimix, and CCR modes and provides up to 200 hours of logbook storage. Divers can quickly transfer their dive log details using Bluetooth wireless technology. 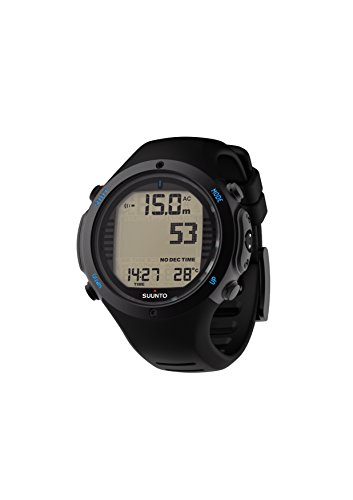 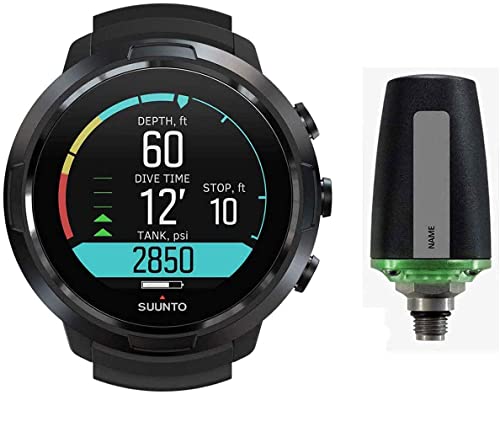 The D5 Suunto dive computer is a wristwatch style with all of the features of Suunto’s powerful Eon Core computer. This slim and sleekly-designed Suunto dive computer is a highly-reviewed scuba diving computer for Air and Nitrox divers, as well as a top pick for freedivers. The color display and three-button user interface are easy to navigate. To switch things up, divers can change the straps for a different look, and the straps are flexible, fitting comfortably on the wrist. Built-in safety alarms use a gentle vibration as opposed to a loud audible alarm. 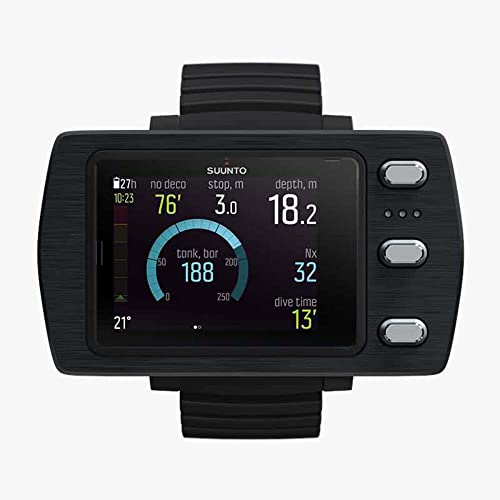 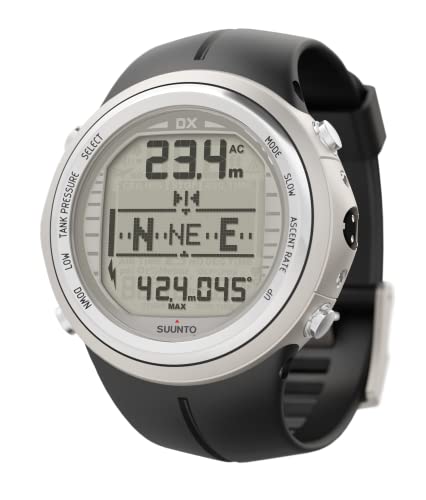 The DX Suunto dive computer is one of the first compact wrist style dive computers that can be used for rebreather and open circuit diving. Built with rugged materials and a sapphire crystal glass display – this dive computer can withstand the wear and tear of a repetitive advanced recreational or technical diver. The Suunto DX features a built-in compass and the ability to switch between multiple gases – up to eight. This dive computer can also be worn as an everyday watch as the wrist strap fits comfortably on the wrist. The Suunto DX is also wireless air integration compatible, for an additional cost.

Suunto is a Finnish company that was founded in Vantaa, Finland, in 1938. A leader in the measuring instruments industry, Suunto manufactures compasses, precision instruments, sports watches, and dive computers.

The founder of Suunto, Tuomas Vohlonen, named the company based on the meaning of the Finnish word suunta, which means “direction” or “path” and in navigation, ” bearing” or “heading.” The headquarters is still located in Vantaa, Finland, and the company employs over 300 people worldwide. The products are sold in over 100 countries around the world. Suunto is a subsidiary of Amer Sports Corporation.

The first Suunto dive compass was produced in 1965 when a British sport diver realized that Suunto’s liquid-filled compass worked underwater. The famous Jacques Cousteau even wore Suunto’s first dive compass. In the 1980’s Suunto began researching, developing, and launching electronic diving computers and has made a name for themselves on the global stage with their high quality and robust dive computer models.

The Suunto DX is the first of its kind, a wristwatch style dive computer that has the functions to work with rebreathers and for open circuit systems. The Suunto Zoop Novo is one of the most affordable, efficient, and highly reviewed dive computers for entry-level and recreational divers on the market. Many of the Suunto dive computers have the option of wireless air integration by purchasing a wireless transmitter to track air consumption during dives.

The Suunto d6i was based on the design of the d4i with a few modifications and improvements to the user experience and materials. The casing of the d4i is made of composite material, while the d6i is made of steel. The Suunto d6i has a built-in compass; the d4i does not. Both of these dive computers have the option for wireless air integration, the d6i can manage up to three gases, while the d4i only one. The Suunto d6i is about twice the price of the d6i due to the improvements made from the d4i model.

2. What is the best Suunto freediving dive computer?

The Suunto D5 is one of the newest and most highly-reviewed dive computers specifically for freediving. The Suunto D5 has the robust functionality of the Suunto Eon but is in a compact wristwatch style package. This dive computer can be worn as an everyday watch for scuba diving and freediving. The materials are durable, and the color LED screen is large and easy to read. This freediving computer comes with a quick-release mechanism for changing out the bands to switch things up.

3. Where can I get a Suunto Zoop battery replacement?

Suunto Zoop batteries are user-replaceable, but Suunto recommends contacting an authorized Suunto service center for any battery replacements. Batteries that are replaced improperly and outside of a Suunto service center will not be covered under the user warranty. When the battery gets low on a Suunto Zoop dive computer, the screen will display a battery symbol to show it must be changed. Suunto recommends not using the dive computer until the battery is replaced correctly, so the device does not fail during a dive.

4. What is the Novo button on the Suunto Zoop?

The Suunto Zoop Novo was made based on the previous version, the Suunto Zoop. The shape and display protection changed slightly between the two, but the significant difference is the fourth button, the Zoop button, that has been added to the user interface on the Suunto Zoop Novo. The settings menu and modes have also been changed slightly, and users find the four-button menu more straightforward to navigate than the three-button menu.

5. Where can I buy a Suunto Gekko dive computer battery replacement kit?