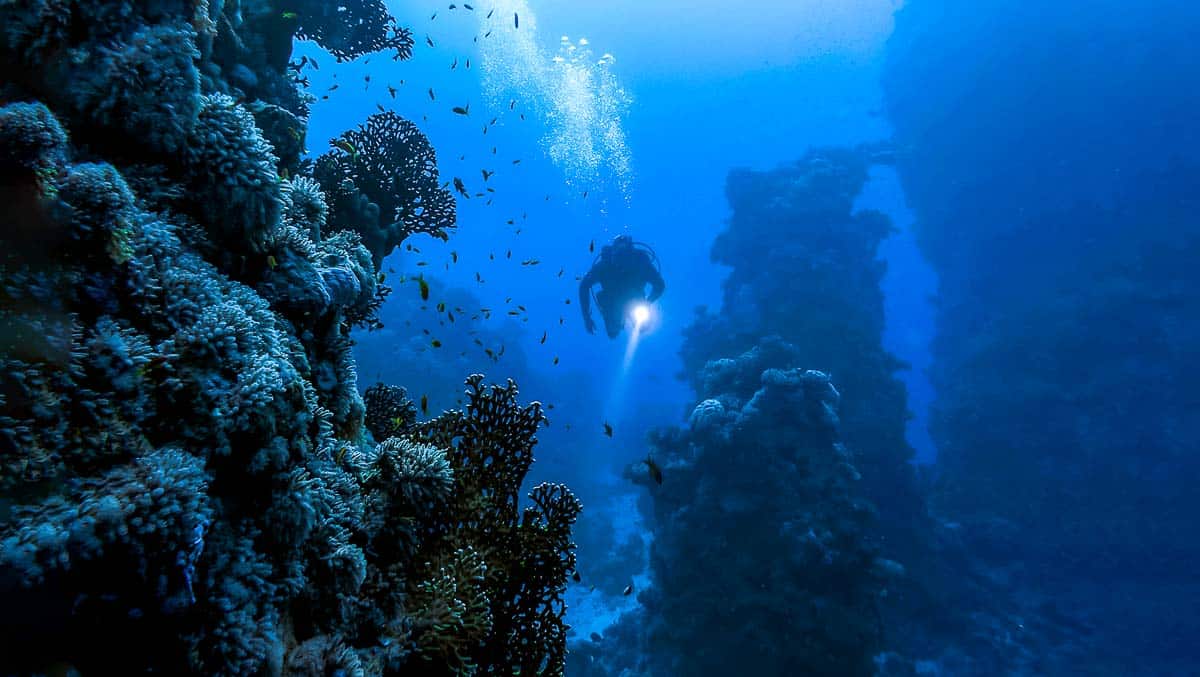 EXPERT GUIDE TO THE BENDS IN SCUBA DIVING (DECOMPRESSION SICKNESS)

The bends diving, also known as decompression sickness, is a condition that can occur when a scuba diver ascends too quickly from the depths of the ocean. The condition is caused by nitrogen bubbles forming in the blood and tissues, and it can be extremely dangerous if not treated immediately.

Symptoms of the bends include joint pain, skin rashes, and difficulty breathing. If you experience any of these symptoms after a dive, it is important to seek medical help immediately.

In this article, we will provide an expert guide to the bends in scuba diving, including information on how to avoid the condition and what to do if you experience symptoms.

EXPERT GUIDE TO THE BENDS DIVING

When deciding to become a scuba diver and explore the underwater world, the most important rule you will learn is to “continue breathing, and never, ever hold your breath.” Holding your breath while on a dive can cause a diver’s lungs to expand, putting them at risk for lung overexpansion injuries.

Scuba diving students also learn how to set up dive gear, how to clear water from their mask while on a dive, and to maintain their buoyancy in the water. These are just a few of the many skills learned by divers to be safe in the water.

In 1803, William Henry, an English physician, and chemist proposed what is now called Henry’s law. Henry’s law states that “at a constant temperature, the amount of a given gas dissolved in a given type and volume of liquid is directly proportional to the partial pressure of that gas in equilibrium with that liquid.” The air we breathe every day contains roughly 79% nitrogen and 21% oxygen, so does the compressed air in a standard diving tank. As a scuba diver, Henry’s law tells us that when the depth of your dive increases, so does the pressure, causing the amount of nitrogen being dissolved into a diver’s bloodstream to increase.

If safety precautions are not taken by a diver to maintain a slow controlled ascent, including a safety stop, the risk of decompression sickness increases. The depth and time of a dive also affect the amount of nitrogen absorbed into your body tissues and bloodstream, so it is crucial to plan each dive accordingly.

Dive tables and standards have been developed over the years to help divers plan their dives safely to prevent decompression sickness. Using the dive tables, a diver can plan repetitive dives that include safety stops, no-decompression limits, and surface intervals. The dive tables create boundaries based on gas law and the time needed to allow the nitrogen to escape from the body safely. Many divers now use dive computers in place of dive tables. The Professional Association of Dive Instructors (PADI) recommends that each diver has their own dive computer. PADI also suggests and that when diving with a buddy, to follow the most conservative computer’s limits.

Even if divers follow the dive tables or a dive computer, that does not guarantee decompression sickness will be avoided. Factors such as diving in cold water, in strong currents, overexertion, or lack of fluid can also put divers at risk for decompression sickness. Physical fitness, age, sex, and percentage of body fat should also be considered.

To help prevent the bends in scuba diving, always perform slow and controlled ascents, never exceed your no-decompression limits (NDL), do not drink alcohol before diving, stay hydrated, and avoid flying or driving to higher elevations within 24 hours of a dive.

Why is it called the Bends diving?

Symptoms of the Bends in Scuba Diving

The bends in scuba diving can affect almost any area of the body or any organ. Symptoms of decompression sickness usually occur within one hour and up to twenty-four hours after a dive; sometimes even longer in severe cases.

Symptoms of the bends include the following:

Decompression sickness is usually divided into two categories. According to the Divers Alert Network, “Type 1 DCS is usually characterized by musculoskeletal pain and mild cutaneous, or skin, symptoms,” and “Type 2 symptoms are considered more serious. They typically fall into three categories: neurological, inner ear, and cardiopulmonary.”

Itching skin and mild rashes are a typical Type 1 symptom. Swelling and localized pain in the tissues surrounding lymph nodes, such as the groin, armpits or behind the ears, is another Type 1 symptom; but is less common.

In extreme cases of decompression sickness, nitrogen bubbles in the brain can form; or in the spinal cord or nervous system column. If any of these symptoms are noticed during or after a dive, it is essential to react quickly. If still on the dive, end the dive immediately but safely. After the dive, remain calm, contact local emergency services, and administer 100% oxygen and fluids as soon as possible.

Can you die from the bends? The answer is yes. Decompression sickness is a serious condition that can lead to death if not treated properly. If a diver presents symptoms that could be related to decompression sickness, have the diver evaluated by a medical professional. It is better to be safe than sorry. Depending on the part of the world you are diving in, there may be a specific medical practice or physician that specializes in diving medicine, hyperbaric oxygen therapy, or treatment for the bends.

How to Treat the Bends

After taking a diver from the water who is showing symptoms of the bends, make sure they are placed in a comfortable position; and keep them dry and warm. When decompression sickness is suspected, the diver should initially be given 100% oxygen and fluids.

Emergency services should be contacted immediately. Depending on the severity of the diver’s condition, they may need to be put in a hyperbaric chamber. Transporting a diver with suspected DCS should be done carefully. The diver should be transported in a horizontal position, lying on their back. If air transport is necessary, find a time frame in the air that can transport the diver below 1,000 feet or that can be pressurized to sea level pressure. Always use high-flow oxygen during transport if it is available.

After reaching a medical facility, the diver should first be treated for breathing problems or shock and evaluated to determine if hyperbaric oxygen therapy is necessary.

Depending on the severity of the decompression sickness, the symptoms may clear up immediately after receiving oxygen but can reoccur later. Soreness in the affected area usually dissipates after a few hours following treatment. Monitoring the diver after treatment may be necessary and follow up evaluations should be scheduled accordingly.

How long should you wait to dive after DCS? The answer varies depending on the organization you ask and the severity of the decompression sickness. For professional divers, the U.S. Navy recommends waiting thirty days after the DCS is wholly resolved with treatment. If it is pain-only DCS, the time may be shorter. Because professional divers are expected to be in top physical condition compared to some recreational divers, the time should be doubled before recreational divers re-enter the water to dive. All divers should dive more conservative profiles after receiving treatment for the bends and should be evaluated by a professional dive doctor before diving again.

What is a Hyperbaric Chamber?

A hyperbaric chamber, or recompression facility, is used for recompression for divers with decompression sickness or the bends. Traditional hyperbaric chambers are made of a rigid material and can be run at absolute pressures around six bars, or more in special cases. These chambers are typically operated by professional diving organizations (i.e., Divers Alert Network is also known as DAN), hospitals, or the Navy. Recompression facilities can range from semi-portable units, one-patient vessels, to large rooms with the ability to treat more than one diver at a time.

During the recompression process, the chamber is pressurized to help increase the ambient pressure surrounding the diver. This process shrinks the nitrogen gas bubbles in their bloodstream and body tissues, reversing the effects of DCS. During the treatment, the pressure is gradually reduced to normal atmospheric pressure.

Depending on the severity of the case, the more aggressive the treatment will be. A recompression treatment can last up to twelve hours or even more. Some facilities use helium in the place of ambient air to decrease the time needed in the hyperbaric chamber. 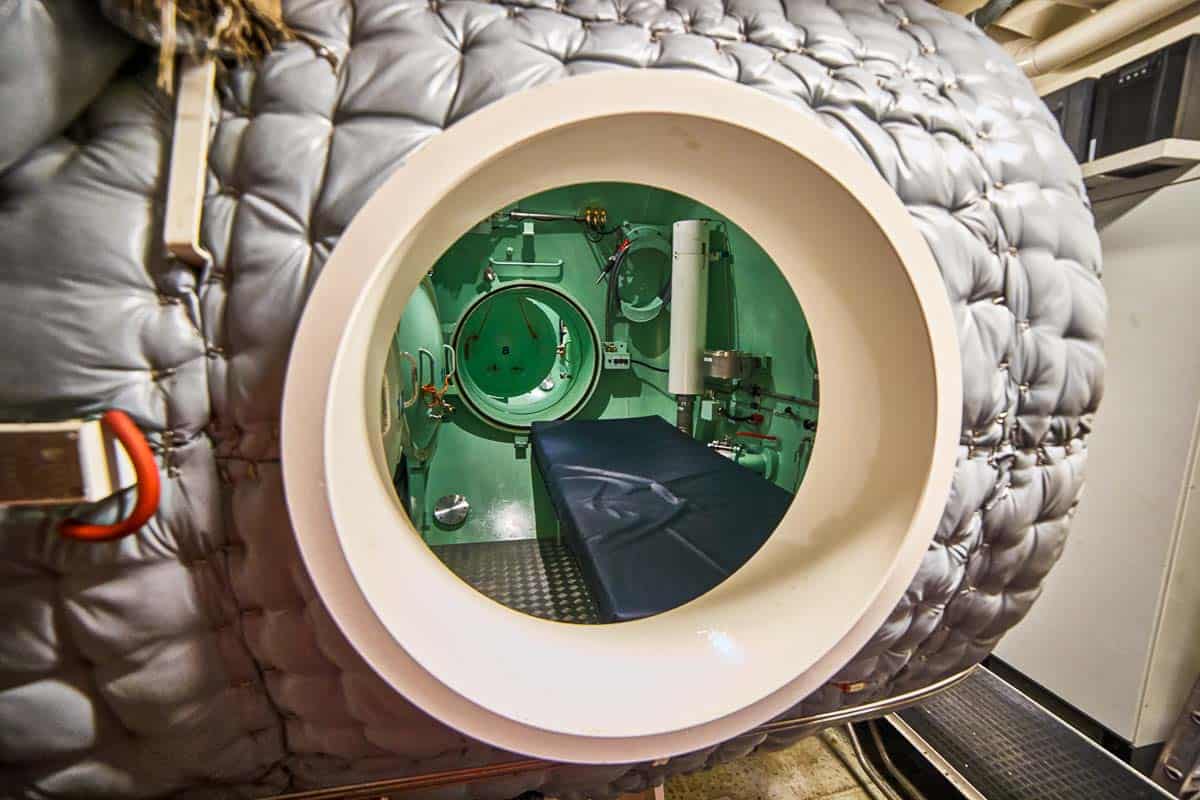 Maintaining a slow ascent rate is vital to preventing decompression sickness. Depending on the organization you ask, the ascent rate varies. The National Oceanic Atmospheric Administration (NOAA) and the U.S. Navy use a rate of thirty feet per minute. Recreational dive training agencies range from thirty to sixty feet per minute.

There has been a great deal of discussion as it relates to the bends and marine animals. Unlike humans, aquatic animals are not usually affected by decompression sickness; this is due to their lung structure. Recent studies have shown that when putting a deceased seal and dolphin in a pressurized hyperbaric chamber, two pulmonary regions are created. One part was compressed, and the other was filled with air. Researchers suggest that the compressed pulmonary region still allows blood flow, but will limit the nitrogen bubbles from building up in the tissues and bloodstream.

This difference between humans and marine mammals explains why marine mammals like dolphins, seals, and whales do not get the bends as frequently as humans.

Freediving and the Bends Diving

Because freedivers do not breathe compressed air underwater, they are not at risk for the bends. Freedivers take a breath of air at the surface before descending and return to the surface with that same breath of air. They are at more risk for shallow water blackouts caused by holding a single breath for long periods; or drowning. Freedivers are affected by the pressure in other spaces like their ears and sinuses, so they do need to equalize just as scuba divers do when they descend.