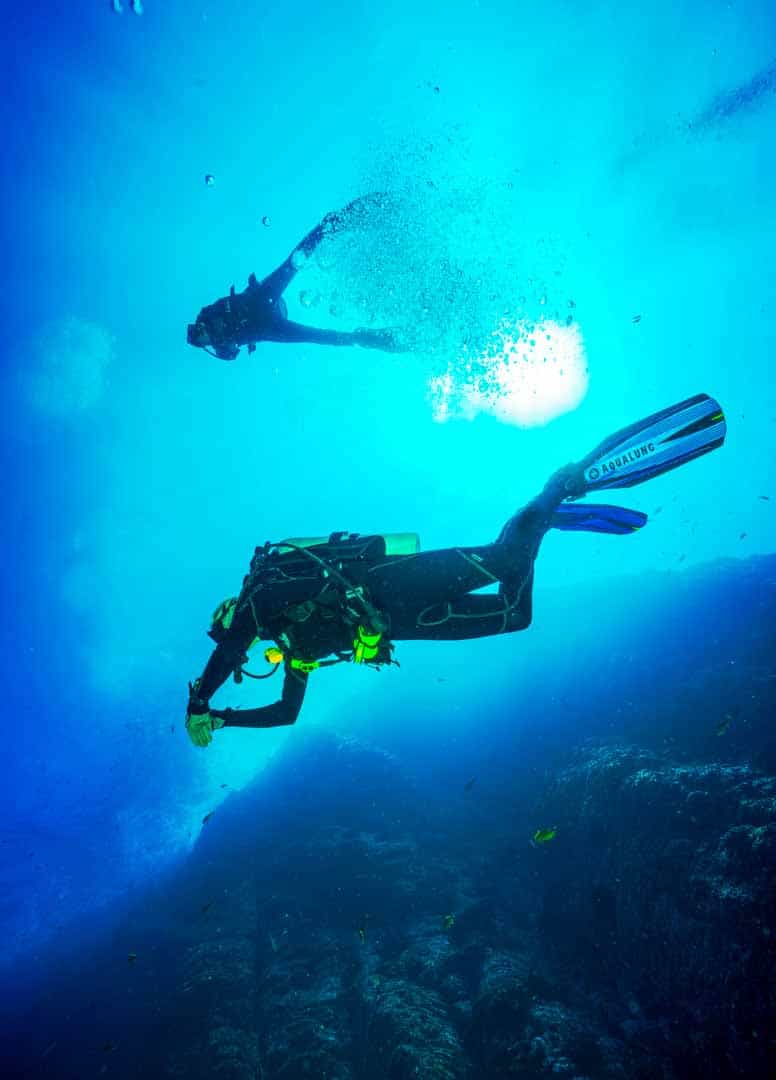 Dear fellow lover of the Blue,

For most of us, that first dip into the ocean’s deepest blue is enough to whet one’s appetite for life. If you got the scuba bug and you’re longing for the depths, you’re eventually going to need the right gear to go with it. And although buying gear may seem daunting at first, there is a certain excitement to it.

So, if you prefer the classic one-by-one approach, then you can check out our 2019 reviews for the best scuba masks, dive knives, and women’s wetsuits to get some inspiration. But if you want to get done shopping so that you can get busy diving, then dive gear packages are the route to go. Plus buying a set is a great way to save some pocket!

We are lucky enough to have Kate: a girl who has dived the world over. She has reviewed all the dive packages out there worth a second glance, and put together a fine selection for your choosing. Whether you are a seasoned pro or a welcome beginner, whether you are looking for ease and comfort or specialty use, Kate has done her research and found your best of breed. Plus, for some extra know-how, do yourself a favour and have a gander at her buyer’s guide too; you are sure to learn something – I know I did!

This Cressi package is the perfect kit of scuba gear for beginners. The package’s focus is on the very essentials: a Cressi Pro Start BCD and a scuba regulator set including the first stage, second stage primary and second stage octopus. The Cressi Start BCD is made of durable nylon and is popular with dive shops and dive schools alike as a tough rental option.

2. DIVER’S SUPPLY SPECIAL OF THE MONTH

This Diver’s Supply package is a formidable low-cost option amongst its competitors. It offers a range of quality brands, including the likes of Edge dive gear and Mares dive gear. Not only does this dive gear package include a BCD, first stage primary, octopus and regular bag, but it allows for computer customization. You can choose either a Suunto Cobra computer console or a Mares Puck Pro wrist computer with a Sea Elite Slimline 2 console. This Diver’s Supply provides quality gear with flexible options.

Cressi proves again that it is one of the best dive gear brands around. This dive gear package stands out for the high quality of the gear and the ease of its use for the total price. The Cressi R1 BCD is fully integrated, saving you the discomfort of a lead weight belt. The Cressi Leonardo computer console is also a stand-out, with an intuitive one-button push navigation and easy-to-read face.

While Oceanic snorkel gear is top of its class, Oceanic dive gear has many great options as well. For instance, this Oceanic Price-Buster package is a super compact unit, fitting down for easy travel. The Oceanic BCD is lightweight, with lots of adjustability. The VEO 100 computer console also has a great uplifted face shape for easy-to-see gauges. Oceanic is a reputable brand that also boasts a range of reliable dive computers, for both beginner and experienced divers alike.

This Aqua Lung scuba gear package is one of the best all-around packages due to the high quality of the gear. Aqua Lung scuba gear is durable and won’t fray or break with heavy use. The Pro HD BCD is weight-integrated for comfort. The Titan primary comes with a balanced diaphragm mechanism for smooth breathing. Additionally, the Aqua Lung i300C computer is also flexible between air or Nitrox, allowing divers with the Nitrox specialty to switch easily from one diving type to another.

The Mares Bolt and Nemo Wide dive package is full of high-quality gear with comfort in mind. The Mares Bolt SLS BCD is fully weight-integrated for comfort. It also has back bladders to help maintain horizontal swimming. The Mares Nemo Wide wrist computer is also a nice addition, with its easy navigation and wide face. This is a Mares scuba diving package built around overall comfort.

The Mares Prime SMU and Abyss 22 package is a great deal for the price. The Mares Prime SMU BCD is fully weight-integrated for comfort and close-fit to the body for maximum streamlining. The BCD adjusts to six different sizes, making this an ideal BCD for different climes where different wetsuits or even dry suits may be needed. The Mares Puck wrist dive computer is also easy to use with a one-button touch navigation.

The Cressi Travelight is one of the best travel scuba gear packages currently available on the market. The entire kit weighs only 15 pounds! The package also contains everything you could need to dive while traveling, including fun accessories like a dive light and travel suitcase. Also, the computer is Air/Nitrox compatible for those divers with a Nitrox specialty. This is undeniably at the top of scuba diving gear packages for traveling.

Buoyancy Control Device (BCD): A BCD’s job is to maintain a diver’s buoyancy underwater. The best BCDs fit close to the body, to streamline mass. This is one of the pieces of scuba gear for women which is important to try on before buying. Sometimes, in women’s dive gear, the chest clip may be too tight for bustier ladies.

Dive Regulator Set: Most scuba regulator packages will include all of the following:

Dive Computers: These are used to measure the time and depth of a dive to provide a safe ascent profile as well as a log of the dive.

Regulator Bag: This is usually a lunchbox-sized square bag with handles, where a regulator kit is stored to prevent damage to hoses or mouthpieces.

Gear Bag: A gear bag can range in size, but normally is big enough to hold a BCD, regulator, mask, snorkel, and fins. Very long or wide fins may not fit average gear bags.

Buying new scuba gear is almost always better than buying used diving equipment. This is due to a few reasons. First, because the gear is not new, it most likely does not have a scuba manufacturer warranty, meaning that if something goes wrong, you are on the hook for fix-up costs. Secondly, unless you know what to look for and how to take apart and put gear back together again, it is very likely you wouldn’t know what problems to look for (in regulator systems, hoses, computers, etc.). However, if you do decide to consider used scuba gear packages, keep the following in mind:

BCDs: Inflate the vest ¾ full and check for frays, ribbing or any other signs of massive wear. Check for signs of diving wear such as that pockets are not torn and that all straps, clips, and belts work smoothly. Do not worry overly much about fading, as chlorine or sun-exposure can bleach color without harming a BCD’s function.

Regulator: Check hoses on a regulator for any signs of damage, rust or micro-tears. Really, a test done by a local shop is preferable before buying. Also, always get a used regulator fully serviced by a licensed professional before using it, just in case.

Dive Computer: First, review the operator’s manual. Run a self-test and check that all functions work. Reselling dive computers is a bit more common than other pieces of dive equipment because as divers become more experienced, they may upgrade to more expensive computers to suit their needs, selling their older, but perfectly working, computers.

WHERE TO BUY GEAR

A pro tip is to research first then head to the manufacturer’s site to price compare. After that, your local dive shop may be able to get a discount off of the manufacturer’s price, depending on what you are ordering. For example, if you wanted a specific ScubaPro BCD such as the ScubaPro Knighthawk BCD, you might notice it isn’t available on Amazon. Instead, you could head over to the ScubaPro dive gear manufacturer site to check the list price. Now, ScubaPro travel BCDs and ScubaPro diving equipment are quite popular with dive shops, in general. If you went to a local shop, chances are that they’d have ScubaPro package items that you could test out or try on. They may even have an understanding with the manufacturer and be able to get you one of the ScubaPro packages for a discounted price.

HOW TO TRAVEL WITH GEAR

Part of buying the latest scuba gear is considering whether or not you intend to travel with it. If so, keep an eye out for lightweight BCD packages which will have light gear to avoid overweight baggage fees at the airport. Some of the best travel BCD packages will also have scuba diver accessories for travel such as gear bags for on-the-go ease (such as the Cressi Travelight package). Just make sure to weigh your gear before heading off. You can always leave behind heavier items, such as regulators and BCDs if needed. Scuba shops have spares to rent. This also applies to weights and tanks. Leave them at home and rent some instead. Also, make sure to check if your flight allows batteries in checked luggage, if at all. If flying isn’t a concern, just make sure to pack your gear safely in your car or on a boat, so that it does not roll around or get damaged by hard impact.

For those who like icy climes, cold water diving equipment is a must. A dry suit, thick gloves, booties, and a hood are also probably necessary. However, because cold water diving requires more gear than for warmer water, cold water diving gear is not usually included in package deals, but instead added onto an existing warmer clime gear setup.

The Nitrox certification can also impact what gear a diver buys. Some gauge consoles or computers may be able to compute Nitrox as well as air mixtures, making them valuable assets for divers switching between normal and Nitrox diving (see the Aqua Lung i300C Air/Nitrox Computer in the  Pro HD Aqua Lung scuba package, for example).

Regardless of which scuba brands you use, the gear cleaning and storage is usually the same. For masks, wetsuits, BCDs and fins, just rinse the items in salt-free water over and over again until any salt or spit residue is washed away. For your regulator, make sure to release some tank air before attaching your first stage. After a dive, dry the dust cap by releasing a quick burst of air from your tank before fitting it back into the regulator for storage. This is important to prevent water from getting into the hoses. Hang wetsuits using sturdy plastic or non-corrosive hangers (such as this ScubaPro hanger). As far as dive gear storage is concerned, once your gear is dry, store it in a location that is out of direct sunlight and gets fresh air so your gear can breathe.

Kate is a product expert, a degreed marine biologist, and a fearless traveler originally from the west coast of America. Kate has been a PADI-certified Divemaster for over 15 years, during which time she has trained hundreds of Advanced divers. She has been scuba diving in over 15 countries worldwide and specializes in cold water diving, night diving, and navigation. Her key interests include teaching English, marine conservation, sampling foreign cuisines, and cenote diving.