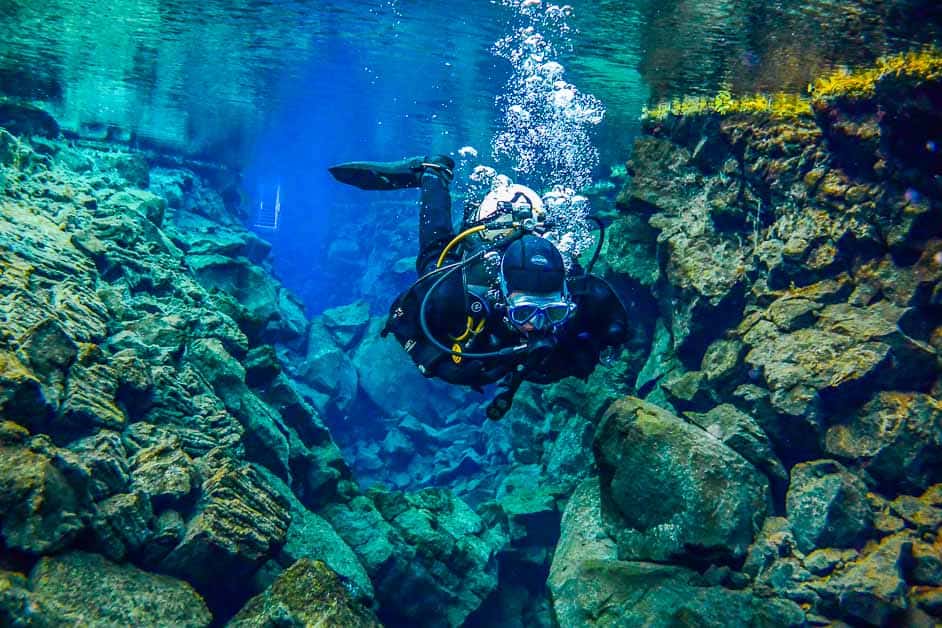 If you want to buy your first dive computer, or you’re looking to upgrade, Aqualung is one of the brands to look at. We review their current catalog offerings here. If you’re a beginner or an experienced scuba diver, a recreational or technical diver, there’s something for you; including consoles, watches, and wrist-mounted computers. We’ve looked at the design, functionality, ease of use, durability, sizes, and battery types for each. There’s also a brief company history to give you some background along with details of the functions and features available. If you’re looking for more than just a computer, Aqualung produces a range of other dive products. So, we also give an overview of those too. 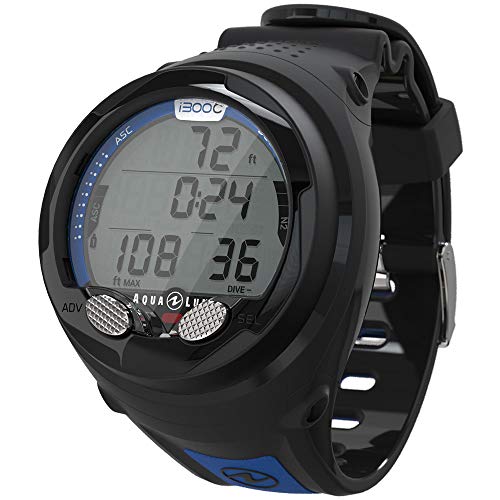 The Aqua Lung i300C dive wrist computer is our top choice for this Aqua Lung dive computer review. The Aqua Lung i300C wrist dive computer features Bluetooth Smart Technology and a user-changeable battery with data retention, giving you the option to store your dive logs on both a computer and a mobile device. This Aqua Lung dive watch has four operating modes; Air Nitrox, Gauge, and Freediving with three gas options, which is perfect for the more advanced recreational divers and technical divers alike. The screen display and user-interface navigation are simple and easy to read. The Aqua Lung i300C dive wrist computer comes in two color options and fits easily on the wrist or over a wetsuit. 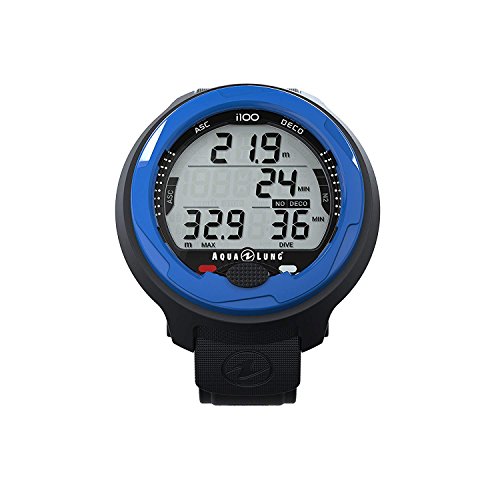 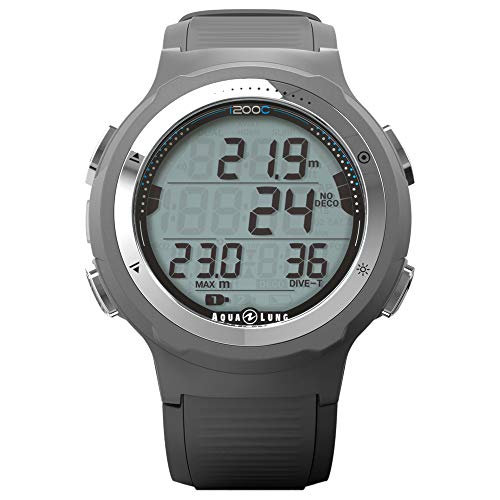 The Aqua Lung i200C scuba diving computer comes in a variety of stylish color options for all types of scuba divers. The Aqua Lung dive computer review for the i200C outlines the easy-to-use features of this wrist dive computer, including a high-visibility, LED alarm light, and intuitive user interface. This dive computer by Aqua Lung has a user-changeable battery with data retention to keep your dive logs stored securely during a battery change. The design of the Aqua Lung i200C is compact and durable, making it an excellent choice for scuba diving, freediving, or using as an everyday sports watch. A popular choice among enriched air certified divers, the i200C wrist computer can be set between two Nitrox mixes. 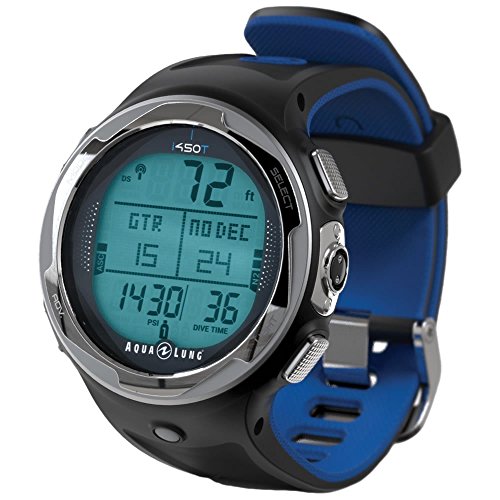 The Aqua Lung i450T dive computer is a powerhouse of dive computers for all types of divers, including technical divers and freedivers. A top Aqua Lung air integrated dive computer; the i450T features hoseless air integration and a built-in digital compass. This wrist dive computer comes in three color options, including gray, black, and blue making it an excellent choice for not only a scuba diving computer but also an everyday sports watch. The Aqua Lung i450T menu navigation is intuitive and includes the ability to switch between three different Nitrox mixes. An excellent diving tool for freedivers, this dive computer has a dedicated freediving memory log and settings to keep track of your underwater sessions. 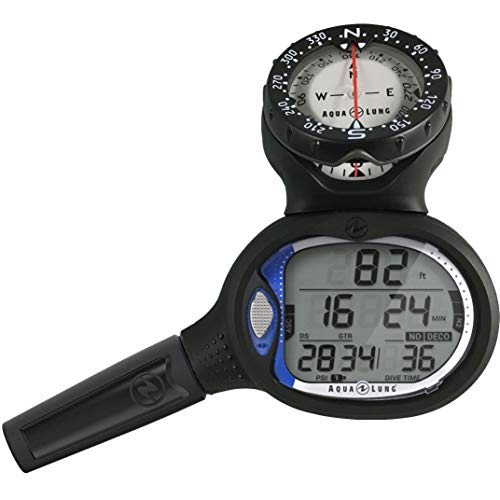 The Aqua Lung i550C dive computer features highly audible depth and ascent alarms, as well as a high-visibility, LED warning light. The software for this Aqua Lung dive computer is user-updateable and includes settings for both freshwater and saltwater. The i550C dive computer can be purchased with or without a compass attachment for navigational assistance and includes automatic altitude adjustment. For technical divers, an extended range gauge mode setting can be selected. This hose style dive computer is easily integrated with your regulator set to keep track of depth and air consumption and features a built-in clip ring for streamlining your gear. The Aqua Lung i550C dive computer is an excellent option for new scuba divers, but along with robust functionality, it is also an excellent option for advanced recreational divers. 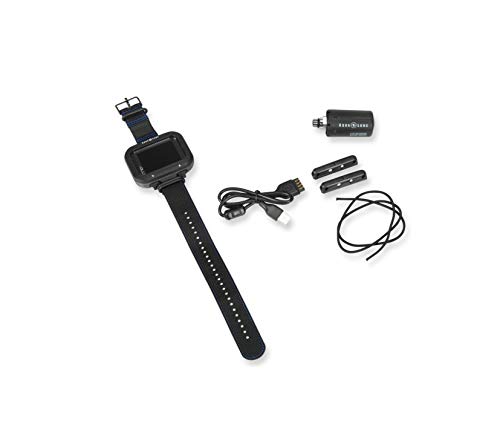 The Aqua Lung i770R dive computer with USB, features a high-visibility color screen that is easy to read during dives and on the surface. The USB cable included in the packaging allows users to transfer dive log data to a laptop, and this dive computer is also equipped with Bluetooth data transfer capabilities. The i770R uses a wireless air transmitter to keep track of air consumption during dives, and one-time transmitter pairing keeps you ready to dive without having to re-connect before each use. The Aqua Lung i770R has four modes, including Air, Nitrox, Gauge, and Freedive mode. The user interface is simple, making it an excellent choice for both beginner divers and technical divers alike.

Aqua Lung was one of the first scuba product manufacturers dating all the way back to the early nineteen forties. In 1943, Jacques Cousteau and Emile Gagnan invented the Aqua Lung, which sparked the creation of a new industry, scuba diving. Throughout the past seventy plus years, Aqua Lung, along with acquiring a handful of other scuba-related companies, have created a trusted product line ranging from regulators for scuba diving, wetsuits for both men and women, and even accessories like dive gloves and dive computers.

1943 – Jacques-Yves Costeau, a French Navy Officer and Emile Gagnan, an Air Liquide engineer, create the scaphandre autonome, an autonomous diving system with a demand regulator which was later to be called the “Aqua-Lung” in English speaking countries. Cousteau and Gagnan also filed a patent application for this demand regulator.

1945 – The demand regulator product, CG-45, was put into production, and the name was based on the creators Cousteau and Gagnan and the year 1945.

1946 – Industrial gas producer Air Liquide also based in France, La Spirotechnique marking the beginning of modern diving. The principals of the company were Jean Delorme of Air Liquide along with Jacques Cousteau and Emile Gagnan.

1948 – The patent for the Cousteau-Gagnan regulator was awarded.

1955 – The Mistral, the first single stage with the ability to regulate compressed air from high-pressure cylinders to ambient pressure launched to supplement the CG-45. Recreational diving becomes more popular.

1957 – The SS 40 horse collar flotation device is designed for diving up to 40 meters, and the Aquamatic single hose regulator is launched successfully.

1961 – La Spiro launched the Calypso-Phot amphibious camera, which is eventually bought and produced as the Nikonos by Nikon.

1962 – Technisub and La Spiro partner to manufacture fins, masks, and snorkels. La Caravelle was a revolutionary fin design with a detachable blade.

1985 – United States President Ronald Reagan awards the Medal of Freedom to Jacques Cousteau for his work in raising awareness on the effects of environmental destruction.

2002 – A bestselling regulator called The Legend is launched and eventually upgraded in 2006 with a patented Automatic Closure Device keeping the regulator free from contamination.

2018 – Aqua Lung celebrates seventy-five years of discovery and the 75th anniversary of Aqua-Lung.

Aqua Lung dive computers provide all of the features needed for both recreational divers and technical divers. Aqua Lung products are also an excellent choice for freedivers, as many of the products, including the i300C dive computer, features freediving settings and unique logs.

Every Aqua Lung dive computer or dive watch is designed to be user-friendly with essential functions like depth and time display. These computers also have safety features like LED-backlit displays and audible depth and ascent alarms. The batteries are user-replaceable and the dive log memory is not lost during a battery change.

Aqua Lung products are not only functional for diving; the Aqua Lung i200 scuba diving computer and the i450t are sporty and low-profile, making them popular to wear not only while diving but also as an everyday sports watch.

For more experienced divers, the Aqua Lung scuba diving computer catalogue is full of options for a computer with Nitrox and multiple-gas functions. Any Aqua Lung dive computer review will mention the ease of use when switching between Air and Nitrox modes. Storing your dive log information is a breeze with Aqua Lung computers, as many of them feature wireless Bluetooth capabilities and hoseless air integration.

Aqua Lung dive computers, either wristwatch style or console-style, are robust and compete very well with many other dive computer brands like Scubapro, Cressi, and Mares. Aqua Lung dive computers come in a variety of styles and colors that fit all different types of divers; they are simple to operate and have easy-to-read displays, making them a perfect choice across the board for many underwater adventures.

The Aqua Lung brand has been around for over seventy-five years, and with that comes a high-quality line of products that have been manufactured, tested, and improved. Aqua Lung dive computers are at the top of the scuba diving market, but so are many of the other products produced by this world-renowned scuba diving supplier.

Aqua Lung has a line of wetsuits, hoods, and rash guards for men, women, and children of all sizes. Aqua Lung also has an accessories line that includes dive knives, gear bags, water shoes, and apparel. The snorkeling sets, including a mask and snorkel, come in a variety of colors and sizes.

The Aqua Lung product line has a large offering of regulators, fins, gloves, buoyancy control devices, dive booties, drysuits and masks. Aqua Lung is a one-stop shop for high quality, high functioning, and long-lasting scuba diving gear for anyone who wants to explore the underwater world while snorkeling, freediving, or scuba diving.